After any large snowfall, many homeowners naturally worry about the ability of their roofs to withstand the accumulation of snow and ice.

That’s especially the case if the recent snowfall brought heavy, wet snow or if the weather forecast is predicting an extended period of below-freezing temperatures that prevent the natural melting of all that snow. But how concerned should you be about roof snow?

After all, most roofs are constructed according to strict building and housing codes. A light snowfall will do little to impact the structural integrity of your roof. 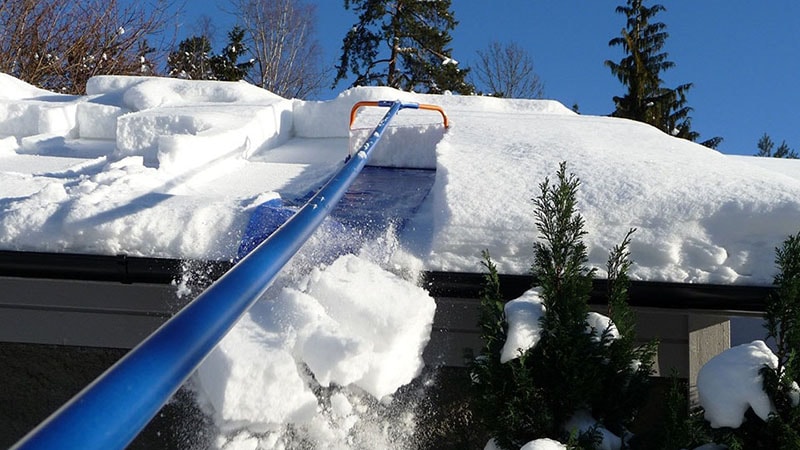 As a rule of thumb, though, roof snow becomes an issue after at least 6 inches of heavy, wet snow. That’s because this snow can easily lead to the creation of dangerous ice dams.

However, if the snow is mostly dry and powdery, you should not have any major concerns until at least 12 inches of snow have fallen.

At that point, though, you will need to seriously address the issue of roof snow removal. If you are unable to clean your entire roof, you will at least want to clear the roof overhangs (eaves), as they are the most structurally vulnerable parts of your roof.

If snow or ice is allowed to build up too quickly without removal, you can easily experience a partial roof collapse.

There are two major tools that you can use to clean your roof – the shovel and the roof rake. In extreme cases, roofing contractors might use steamers or heated cables to melt ice and remove ice dams.

The snow removal tip that just about everybody agrees on is the importance of a roof rake.

A roof rake is exactly what it sounds like – a long-handled tool resembling a rake designed to gently scrape and remove snow and ice from your roof without causing damage to the roof surface or shingles.

You have various options for the roof rake, with many people preferring a metal one for increased durability and raking power.

However, keep in mind that a metal rake is going to be heavier to manage, and it also has the potential to cause more damage to your roof if not wielded properly.

In contrast to a metal roof rake, you can also choose one made out of plastic.

Generally speaking, you will also need a roof rake extension rod if you have a two-storey or three-storey home.

With a regular roof rake, you certainly won’t be able to reach the upper peak of the roof. And there’s one more thing to keep in mind regarding roof snow removal: It helps if the roof rake has a slight bend or curvature in the handle as close to the head as possible.

This gives you a much better angle for roof snow removal. You are able to rake downward much easier, and as an added bonus, this slight curvature will also make it much less likely that the long rod of the rake will touch the surface of your roof.

There’s no point in scraping snow and ice from your roof if you damage shingles in the process!

Some homeowners – especially those with flat roofs – are used to using a shovel to extract snow from their roof. However, most roofing experts advise that only experienced contractors should actually use a shovel.

For one, getting up on the roof in icy conditions can be very perilous. It’s almost always better to get rid of snow while standing on the ground. And, secondly, there are really only a limited number of conditions when you would actually need a shovel and not a roof rake.

For example, if snow is too hardened or packed for your roof rake, you may need a shovel. And the same is true if the surface area of your roof is simply too large. In that case, you may need to call for a team of contractors to remove the snow.

There is a basic approach to removing snow from your roof. It follows a very easy three-step process:

An essential priority should be to remove snow from the overhangs (eaves) first. This is very easy to do with a roof rake, since the eaves are closest to the ground. Reaching up and over the snow, pull the rake down through the snow.

You should always do this while standing on the ground. There is no situation in which you need to use a ladder to clear the eaves.

The easiest way to know whether or not you have ice dams is by inspecting the perimeter of your home for icicles.

If you see roof icicles, then it means that snow is melting and refreezing. Ice dams are simply ridges of ice that form at the edge of the roof and prevent melting snow from properly draining away from the roof.

They can be very dangerous because they prevent the natural process of snow removal caused by higher temperatures and melting.

If your roof rake is unable to dislodge these ice dams, then you will need to take the next step to melt the ice dams. One tactic, for example, is to use a calcium chloride ice melt formula.

When placed next to the ice dams, it causes the natural melting of these ice dams. In extreme cases, roofing contractors might need to apply heated cables or wires.

Since snow can become very heavy, it is almost always preferable to choose the latter approach. You will want to work in one-foot increments. Work your way around the roof, clearing one foot of snow.

When that process has been completed, you will repeat it, this time for the next one-foot increment of snow. Continue doing this until the entire roof is free of snow. Along the way, just take special care not to scrape the shingles.

While removing snow from your roof is a relatively straightforward process, it does come with a number of safety and practical issues to keep in mind.

As already noted, never use a ladder in icy or snowy conditions. And, whenever possible, try to clear all snow while standing on the ground with a roof rake. Only get rid of as much snow off the roof as you can safely reach. If you are unable to reach the peak of the roof, you might need a roof rake extension.

If you are not sure which kind of snow you are dealing with, just examine the snow on the ground around the perimeter of your home. It’s also worth keeping an eye on local weather forecasts in order to understand the prevailing weather conditions in your unique geographic location.

In most cases, 12 inches of snow on your roof is the critical point. This is when you could be facing the imminent risk of a roof collapse and when you need to take a more active role in the removal of snow.

Moreover, if you have ice buildup, this could cause far more of a risk to the structural integrity of your roof than snow. Ice, if left unchecked for too long, prevents the natural melting and drainage of snow.

When snow has no place to go because of all that ice, it will naturally attempt to find cracks and holes in your roof or exterior walls – and that’s when you could be facing a huge expense for roof repairs.

If you have more than a foot of heavy snow on your roof, you must remove it. The best tactic is to use a roof rake to first clean the eaves, and then the lower edges of the roof.

There is rarely a good reason to climb up on the roof and push snow off. If you are uncertain of how to get rid of snow, or if you are unable to brave particularly adverse weather conditions outside (such as swirling winds and slippery ice), then it might be best to hire a professional contractor to finish the job.

Just one final tip: Make sure that your contractor is qualified, insured and bonded.