Double pitched roof. Your roof is possibly the main foundation of your house, and if you ever wondered why having a top-quality roof is essential, we have some answers to share.

Whether it is a heavy rain, high winds, heavy snowfall or a hail storm, having a lesser quality roof is a compromise to your safety and the safety of your family.

Depending on the regional weather in your area, it is vital that you have a roof that will keep you from all the weather conditions as well as moisture issues.

Apart from single roofs, which do not require any intermediate support and include couple, collar and close couple roofs, double pitched roof take the roofing quality to the next level.

And if you have ever looked for a double pitched roof definition, it is basically a stronger variety of roof than the single one. But before we go into more details, let’s classify what pitches, spans and rises are.

When setting a roof out, many factors must be considered. The roof span is the primary focus, which is the distance across the roof measured to the edges of the wall plates.

Afterwards, the roof height, commonly known as the rise, is another thing to look for since the vertical height of the roof must be measured from the top to the intersection as a straight line running through the center of the rafter.

But most important is the roof pitch (the angle or slope of the roof), which can be expressed in fraction, ratio or degrees and divides the rise by the span.

In other words, if a roof has a span of 4 meters and a rise of 2 meters, the pitch would be 1/2 or one-half of the pitch. Since it is half the span, the angle of the roof would be 45 degrees.

Now that we defined pitching and other preliminary things in roofing, let’s get back to the double pitched roof definition.

Pitched roofs are specific since they have networks of frames to support their structure and their covering.

When speaking about pitched roofs, there are two main types of wooden frames: a cut roof and a trussed roof, which are usually combined, resulting in highly complex roofs.

To cover greater spans, at times the roof’s weight must be transferred onto a purlin, which connects both of the load-bearing walls. This forms the classic double pitched roofs.

Therefore, a double pitched roof is a roof whose rafters require an intermediate support due to the length between them.

The support in this case is usually a beam, which is always secured under them, providing a point halfway between the wallplate and ridge accordingly. The beam element in double pitched roofs is also known as a purlin.

When speaking about gable roofs, the purlin we just mentioned is built into the gable wall to provide extra support. In double-pitched roofs, however, it is fixed to its rafters and jointed in all of the corners of the roof, both internal and external.

Traditional roofs were constructed with added support in the form of roof trusses. However, this support always depends on the size of the double-pitched roof and its type.

Trusses can take many forms and various designs. While some of them are designed for a particular type of roof, others are made to match a specific span.

Trusses are parts without which a double pitched roof cannot be built. Some of the trussed roof frame designs include scissor-trussed roof, room-in-attic, clerestory and triple howe. You can see the images below and get a clearer idea on these designs.

In modern terminology, double pitched roof are also known as double roofs and are constructed of lightweight roof trussers called trussed rafters. The terminology for the roof in general is double pitch roof truss or double-sloped roof.

Below, we present a drawing in which you can see a house in building with a partly hipped roof with one gable and one hipped end.

Just so you know, a fully hipped roof has no gables and its eaves run round the perimeter of the roof of the house. Also, they are of the boxed or enclosed type. Double pitched roof can also be stylish in terms of design. Below is an example of a house with a covered porch for people on the left side which is the main result from the double-pitched roof. 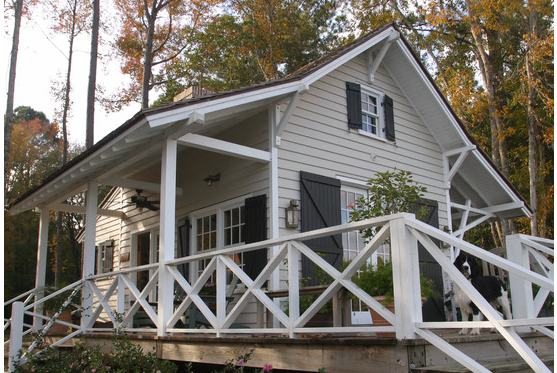 The double pitched roof is a traditional and most often used type of roofing. Although it can be at best described as a triangle that consists basically of two surfaces being connected with a ridge in the top, they are additionally supported by a ridge connecting the load-bearing walls through the top.

The triangles in the end are called gables, and their main advantage is the installation of windows so that natural light comes inside of them.

The best part about double pitched roof is the fact that there can be various types of roof covering installed to it, even coming from the lowest outcrop.

Although they are being classified as both symmetrical and asymmetrical solutions, double pitched roof are mostly symmetrical with equal surfaces and are considered as a perfect triangle.

The asymmetrical ones, on the other side, usually have their roof ridges placed aside from the center as their roof surfaces differ in their length and covering area.

In a nutshell, when aesthetics comes into play, the designs are certainly interesting but may negatively affect the usage of the building area below the roof itself.

Although they demand a lot of labor and skill, double pitched roofs are still constructed, and they are considered a great option in many houses.